A Note on Doges

I was told about dogs chasing cyclists before starting the trip, but was still amazed at the number I've encountered. The majority were in Missouri and Oklahoma, but at least a few dogs have chased me in every state. I like dogs and I know they're more excited and curious than aggressively territorial, so I usually just slow to a stop and pet them until they get bored of a stagnant stranger. Really I just want to avoid getting them riled up so much that they sprint into the street where a car could be right behind or in front of me.

There was one encounter where it was pretty obvious the dog was angry;  deep growls interrupted the barks and he/she made a beeline right for my leg. I unlatched my foot and... bopped it in the nose. I felt bad, but decided I would much rather deal with the guilt of making a dog whimper than a big bite in my leg. 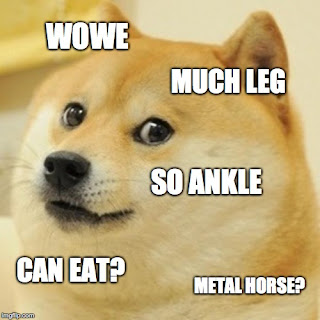