Had another 2 flats within an hour of leaving Spencerport, so I knew something was up. I stopped in Holley and visited a bike shop, where the awesome owner Chris put on a rim strip and a new touring tire for my rear wheel. He also showed me how to patch tubes like a pro. At that point with a strong headwind and 2+ hours lost to the tire fiasco, I knew Buffalo wasn't a viable option - I settled for Lockport, where a WarmShowers host named Nancy put me up for the night.

Nancy's pretty interesting. When I first stepped in her door, she asked that I take my sweaty socks off and instead put on a pair of hideous lavender slipper-socks that she provided. Then we toured the house while she explained general rules. I use "general" hesitantly because she described, in detail, how to moisten the four little suction cups on the shower curtain such that theyy stick to the shower wall more effectively.

No water on Nancy's bathroom floor, that's for sure. No, ma'am. 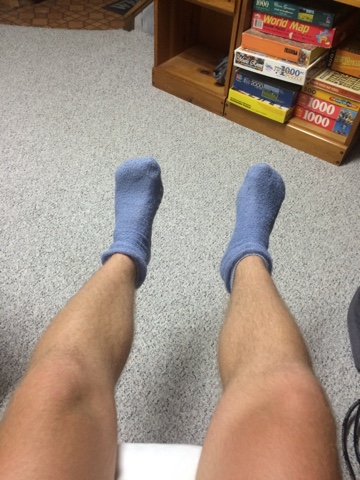