On a map, the distance between these two cities is only 70 miles. More on that in a bit.

Really nice day to start off. Most of the miles were done and behind me by noon. I even stopped in Fanning to see the world's largest rocking chair. 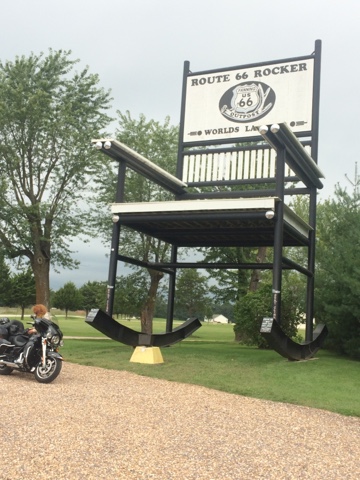 Not allowed to climb on it, bummer!

Route 66 used to be the main highway running from Chicago to California. When Interstate 44 was put in, the path was pretty much the exact same. Now 66 is used by local traffic, passing through each town and city center as it weaves through the country. 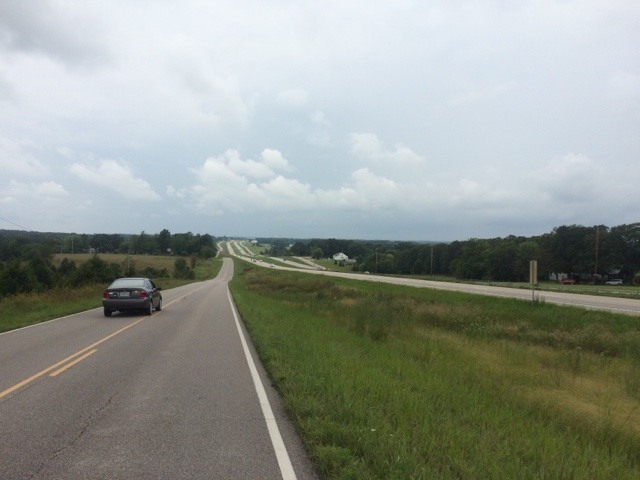 I am on the south outer road, and the two center roads comprise I-44

Given how parallel the two paths are, you'd think it's insanely easy to navigate. But 66 twists and turns and sometimes leaves 44 entirely to go into town and connect with other roads. So yes, back to my other point - I ended up going 5 miles off the the route and had to backtrack. And then the thunderstorms hit. And then I got lost on a dirt trail. And then I flew off the bike into a swamp. So what started as a pleasant day turned real nasty, real quick. At some point I had to trek with first my bags through 100 yards of dense brush before going back to carry the bike.

But! I found the road, ate some jerky, swigged some Gatorade, and kept pedaling. I reached my host Lisa before the sun set. She's a chemical officer in the Army, and took me on a short tour of Fort Leonard Wood, which is right near town.