Safe to say I can do 75+ each day now, no sweat. Actually a lot of sweat. But the stamina is there finally; I can do the rides and still have energy to walk around, meet people, and find my place to stay.

Also safe to say it was time to leave St. Louis. That city is all over the news right now, and I don't feel like getting caught up in riots. All good experiences while I was there however!

The urban sprawl is amazing coming out of the city. I spent at least the first 2 hours of the ride weaving in and out of strip malls in an effort to find countryside. Very stressful riding as I tried but failed to avoid rush hour.

Once I escaped the hair salons, car dealerships, and crummy-looking restaurants, I met Virgil. He's a 68-year old thyroid cancer survivor who eats and drinks from a tube, and he was in the middle of a 60 mile ride. Never met anyone so committed to fitness at that age. He used to be an ultramarathoner and has completed three bike trips across America, including a race. Virgil lead me through some back roads and dropped me off about halfway to my destination - I'm grateful for the company.

Today was almost a repeat of day 2. I rode into Sullivan knowing I had no host, but immediately tried the fire dept. No response to buzzer... familiar feelings of panic, immediately qualmed by knowing I could always stealth camp in a park I saw a few miles back.

Quick chain of events:
1) Man pulls up to fire station, introduces himself to me as Mike. Mike is a volunteer firefighter and a paramedic. I explain my situation.
2)Mike calls fire Capt. Mark.
3) Capt. Mark calls Fire Chief
4)Fire Chief calls local minister
5)local minister calls me, tells me to go to police station.
6) I follow Mike to police station.
7) bewildered, I fill out paperwork at the police station. Then the clerk hands me a meal voucher and a 1-night motel voucher, all paid through the church.

I cried a little and felt embarrassed in front of Mike and the clerk. 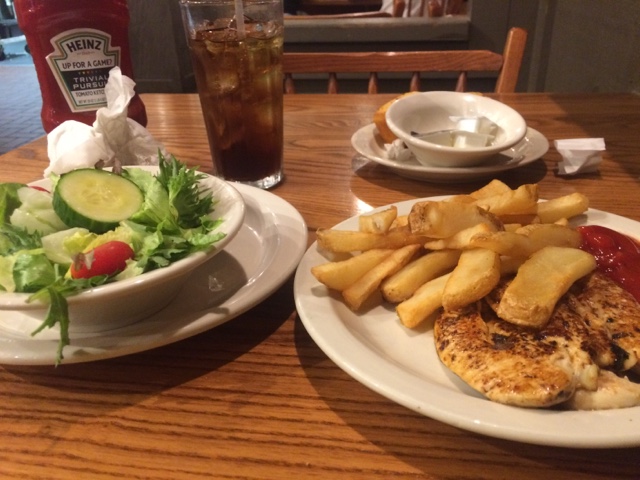 Mmmmmmm $10 to Cracker Barrel. I was mentally prepared for a dinner date with Chef Boyardee.

The motel is a sketchy Super 8 across interstate 44. The first thing I noticed walking into my room was an old bath that was presumably left stagnant from the last occupant. I wasn't that grossed out - heck, it was probably cleaner than me. It did beg the question though, who takes a bath at a Super 8?

But hey, beggars can't be choosers. I'm filled with joy from the generosity of this town.

Ozarks! I'll post a picture of the new terrain tomorrow.