Raymond wasn't supposed to be my final destination, but I arrived there just as some heavy clouds moved in and started dumping absolute buckets of rain. My host offered to pick me and the bike up. I accepted, knowing I am not a purist enough to insist on pedaling another 15 miles through a t-storm for the sake of legitimacy. Had that been the pointof the trip, I would have started at the Atlantic coast anyway, not 200+ miles inland. I waited in a cafe and ordered some food - a nice farmer picked up my bill!

Ken and Becky have a small pork farm in Gilespie. Their two sons are grown and have moved out; now they host many cyclists riding through the area with generous food and accommodations. I usually shy away from talking about the economy or politics (I am ill-versed in both subjects) with any of my hosts, for an irrational fear of sparking hot debate and being tossed out. Ken however had some good insight about the agrarian-based economy in the Midwest: farming practices, GMOs, etc. 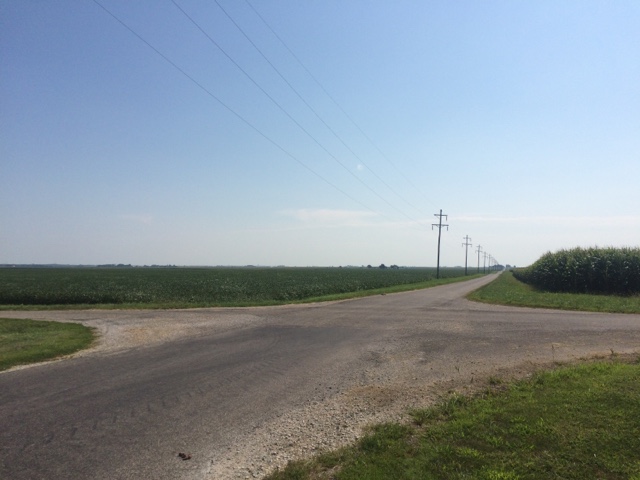 This was the first intersection I ever saw with no signs whatsoever. No stop, no yield. It's probably implied to just creep up and peek around. 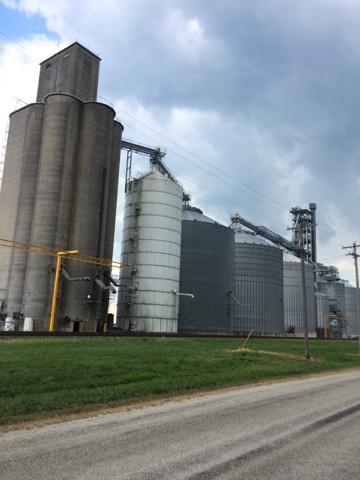 Every farming town around here is very cute. Each has its own small water tower, post office, a couple of businesses, a diner or cafe, and maybe an auto shop. Appended to each town are these: grain silos alongside the railroad. Big ugly towers in contrast with the scenery, but iconic nonetheless.

Here I climbed one and took a bad panorama 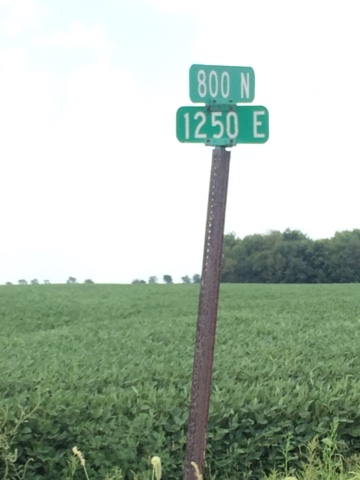 I initially felt lost riding through fields with no towns in site, but I caught on to the county road system after leaving Cleveland.

All the roads are numbered in normal increments of 100, and more uncommonly by 50 or even 25 if the fields are divided significantly amongst multiple farmers. It's typically good to stay on the even 100s - they're most often paved. Each country "block" is roughly a mile. Roads labeled N or S run east/west, and vice versa. It's tricky and counterintuitive because a road running east/west is a certain distance north or south of a zero point in the county - the whole thing is just a scaled-down system of lat/long coordinates.

Where are the towns within a county? I have no clue. But usually when I am near, one of the numbered county routes switches to a named road, and I know I am headed in the right direction and roughly 3-5 miles away.

Oh, and all the roads reset once you leave one county and enter another. Yes it's just a bunch of numbers, but they're kind of fun and I literally have DAYS to think about them.
Posted by Eric at 3:08 AM